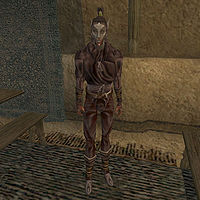 Feruren Oran is a Dunmer spellsword who has a contract on him for the Morag Tong. He can be found at the Elven Nations Cornerclub in the Vivec Hlaalu Canton. When you join the guild, he will be your first mark. He will refuse to talk to you, shunning you with "I don't like the way you've been staring at me," making it impossible to lure him into combat by taunting him. You'll have to either cast Frenzy on him or strip naked in order to kill him without incurring a bounty.