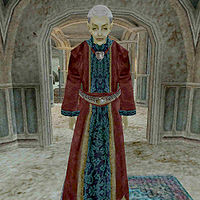 Estoril is an Altmer battlemage and Wet Ear of the Thieves Guild at The Rat In the Pot in Ald'ruhn. She sells a selection of Destruction and a few Conjuration spells to anyone who asks, though like most in the Thieves Guild, she will refuse service if you have completed The Caldera Spy quest for House Hlaalu unless you are also in the Guild and outrank her. She will donate 1-5 gold (depending on her Disposition) during the Buckmoth Alms quest.