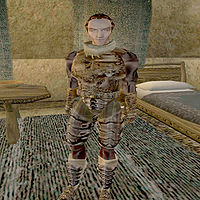 Durus Marius is an Imperial Dark Brotherhood assassin located in the shrine of Assernerairan, which is in the Underworks of Vivec's St. Olms Canton.