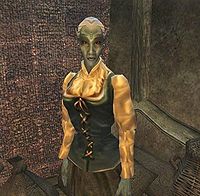 Drarayne Thelas is a Dark Elf commoner who has the largest collection of pillows in Balmora, or, possibly, anywhere in Morrowind. She can be found in her house on the east bank of the Odai River in the center of Balmora. She is wearing a common shirt with matching skirt and shoes. She is carrying a pillow and a key to her house. Aside from her natural resistance to fire and the sanctuary provided by her ancestors, she knows no spells.

In her house are various clutter items and a copy of the following books: The 36 Lessons of Vivec, Sermon 20, The Cantatas of Vivec and The Anticipations. You'll notice she has a lot of pillows, both in her house and her storage.

She then rewards the player with an Extra-Comfy Pillow.