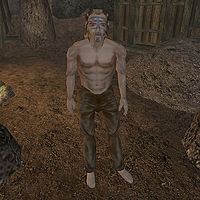 Daglin Selarar is a Nord barbarian and Protector of the Fighters Guild imprisoned in the Ministry of Truth for indecent assault of a woman. He protests his innocence, saying that the woman in question made a pass at him. He holds a great, borderline-violent grudge against the priests who interfered. He doesn't mind the guards holding him incarcerated, noting they are only doing their job. His sole possession is the pair of common pants he wears. Aside from his natural resistance to shock, immunity to frost, ability to shield himself, and a natural frost damage spell, he knows no spells.