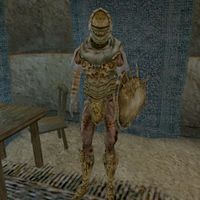 Brethas Deras is a Dunmer spellsword located in the Elven Nations Cornerclub in the Hlaalu Canton. He is supposed to duel Rothis Nethan, who has lost his nerve.

"I don't know who you are or what argument you had with Feruren, but I want no part of it." 'Goodbye.

If you speak to him during the duel:

"Stand aside, %PCName. Let me at this coward." Goodbye.
"I knew I could beat that coward."

"Redorans sure talk a lot about honor, but when it comes time to test it, they fail."

After Rothis agrees to go on with the duel:

"You can tell Rothis Nethan that I'll be there. He just better show up this time."

"I won. But at least Rothis Nethan showed up and proved he had some courage."