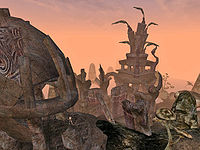 Assurdirapal is a shrine to Malacath west of the Sanctus Shrine. The exterior of the shrine is guarded by a few daedra. Upon entering the shrine, a short set of stairs leads to a hallway. A door to the lower level of the Inner Shrine is located at the base of the stairs, guarded by an Orc agent named Shakh gro-Durga, who is a medium trainer in Acrobatics, Light Armor and Sneak, provided you can calm him down. Heading to the right leads into another chamber guarded by an Orc warrior. On the left side of the room there are two barrels of ingredients in the near corner, along with some sacks of food. The back left corner holds crates containing weapons and clutter. The right side of the room holds a set table, along with four bedrolls, a sack of gold, a spoiled potion of swift swim, a potion of detect creatures and a locked chest in the back corner containing a few pieces of Orcish armor. A staircase leads up from the back of the room to the door to the upper level of the Inner Shrine and backdoor leading to the outside. The lower level of the Inner Shrine is guarded by an Orc healer named Ghob gra-Gholob who carries a few potions, a common soul gem and the Heavy Armor skill book How Orsinium Passed to the Orcs. The bottom level also contains the altar, which holds the expensive Daunting Mace, a ghoul heart, an emerald, a ruby and a cursed diamond. Behind the altar is a trapped chest containing an assortment of random magical items, potions and books. Activating the statue will begin a quest from the Daedric Prince Malacath. The upper level of the Inner Shrine is guarded by an Orc warrior, but doesn't contain anything else. 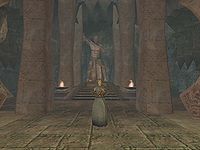 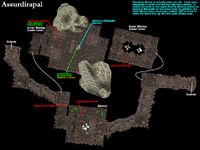