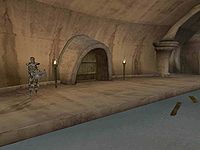 Assernerairan is a shrine to Mehrunes Dagon in the sewers beneath Vivec's St. Olms Canton.

A woman named Gulvilie Arinith stands guard in steel armor outside the shrine. She will most likely attack you on sight, especially if you have a weapon drawn. A Morag Tong quest requires you to kill a leader of the Dark Brotherhood's base established here. You'll find four Sanguine items on the three worshippers of Mehrunes Dagon in this shrine. The emerald on the altar is cursed. Inside the shrine good loot can be found on the bodies. Including some Sanguine items needed for the related Morag Tong quest, and a Daedric Longsword on Relas Arothan. Due to the level of the occupants and the fact that one wields a Daedric Longsword which can inflict devastating amounts of damage, lower level players may want to avoid this location until adequately prepared.

Sovisa Adas will offer her services as a trainer if she is successfully snuck up upon or calmed. She provides medium training in Short Blade, Light Armor, and Sneak. 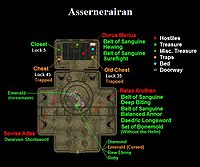