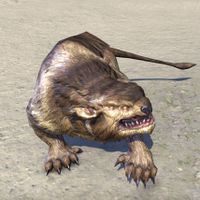 Welwa continued to inhabit the wilds of Craglorn on mainland Tamriel. They are often domesticated and armored by the Iron Orcs of the region, who use them as war beasts. History indicates that every pastoral society in Craglorn's long history: Nedes, Yokudans, Goblins, and Orcs has domesticated them at some point.[6]

In the Second Era, the Sapiarchs of the Crystal Tower reintroduced welwa to Summerset Isle by bringing in mated pairs from Craglorn. These welwa quickly spread across the wilderness of Summerset, although many inhabitants of the Isle were displeased with their reintroduction.[4]