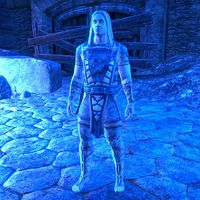 Vraseth, progenitor of the bloodline

Vraseth is one of the vampire bloodlines of the Iliac Bay area. Those of the bloodline are gifted with nimbleness. The bloodline dominates an area of High Rock - specifically the regions of Daggerfall, Betony, Glenpoint, Kambria, Tulune and Glenumbra Moors. They have made a rare alliance with the Thrafey bloodline. They were the enemies of the Travelers League, a branch of the Mages Guild responsible for teleportation before the organization collapsed.[1]

The bloodline is named after Vraseth, a tribal Nede from ancient Skyrim who was involved in the attempted cremation of Lamae Bal, the first vampire. After awakening on the pyre, Lamae brutally raped the men of the tribe, seemingly passing on the gift of vampirism in the process.[2]