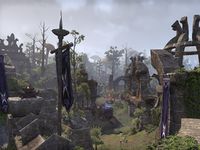 The inner ruins of Ularra circa 2E 582 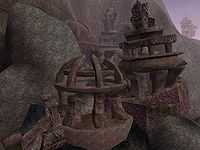 Ularradallaku (also known as Ularra)[1] is a Daedric ruin located on the slopes of Red Mountain in the island district of Vvardenfell, situated in the province of Morrowind.

In its time, Ularradallaku was a temple dedicated to Mehrunes Dagon, the Daedric Prince of Revolution and Destruction. Additionally, it was also dedicated to his ally Hircine, the Huntsman Prince.[2] It subsequently fell into ruin, becoming covered in overgrown plants. During the Interregnum circa 2E 582, Ularradallaku's ruins were used by the Circle of Champions, a guild consisting of the greatest gladiators and fighters found all throughout Tamriel. Fighters from all three sides of the Alliance War came to the Ularra battleground to fight for the glory of the Fire Drakes, Pit Daemons, and Storm Lords arena teams.[3]

Eventually, the ruins were abandoned by the Circle of Champions. The Ordinators had the duty of keeping worshippers from restoring old Daedric sites such as Ularradallaku, as worship of the Bad Daedra was forbidden by the Tribunal Temple. However, by 3E 427 the Ordinators had begun to neglect this duty due to being occupied with the suppression of heretics and dissidents, allowing many of the temples to come back to life.[4][5] Ularradallaku was one such site, being reclaimed by worshippers of Mehrunes Dagon. That same year, the Dark Brotherhood attempted to gain a foothold within the island of Vvardenfell, and negotiated with cultists of Mehrunes Dagon so they could be sheltered by them in their associated Daedric ruins throughout Vvardenfell. Eno Hlaalu, grandmaster of the Morag Tong, took notice and began ordering an assassin to wipe out the strongholds of the Brotherhood. One of the worshippers, an Altmer named Inganar, was one of the wielders of the Threads of the Webspinner, specifically the Glove of Sanguine Safekeeping. The glove were reclaimed by an agent of the Tong that same year.[6]