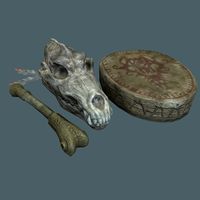 From the left to right, the Totems of the Hunt, Fear, and Brotherhood

The Totems of Hircine are ancient artifacts of Hircine, predating mens' ability to write, speak, and properly think.[1] They are just three of the Symbols of the Five Aspects, the other two being the Spear of Bitter Mercy and the Totem of Claw and Fang.[2][3]

The Wolf Skull Totem,[3] also known as the Totem of Fear,[4] is an engraved and feathered wolf skull that is said to have been used by shamans in blood ceremonies to create Lycanthropes. It augment's a werewolf's presence, making people cower in fear save for those that have caught a glimpse of Hircine's face.[1] It is said to be worn by Storihbeg the Manbeast, the wolf aspect of Hircine,[3] whom similar to his Wolf Skull totem, is credited among the Reachfolk with introducing the gift of skinshifting to mortals to remind them that they can be predators, not prey.[5]

Uricanbeg is the Stag aspect of Hircine whose hooves beat the Blood Summons that lure prey into his herd, which are then led into the Hunting Grounds where they meet their end.[3] And so Uricanbeg is represented through the Totem of the Brotherhood, a mundane drum whose beating does the blood call which allows the summoning of pack members,[1] or the calling of prey to hunt. [5]

Gulibeg's symbol is the Wand of Bone, also known as the Totem of the Hunt,[4] which was fashioned from a shard from Lorkh's ribs, and has the ability to confound any mortal.[2] It was used as a medicinal wand in an ancient brotherhood, and is believed to heighten a lycanthrope's sight and smell, making it hard for a prey to flee.[1]

Circa 2E 582, due to the Gray Host expanding into the Karth Valley, many Reach clans fled to the safety of Markarth's walls. The Shrine of the Hunt-Father was erected within the city, and the Symbols of the Five Aspects were requested to be placed in the shrine for safety. An adventurer aided in their recovery, discovering that most of the couriers sent to retrieve them perished, and recovered the symbols from them. With all relics in place, the shrine in Markarth completed their collection.[2]

In 4E 201, after the rise of the new Harbinger of the Companions, the Harbinger with the aid of Aela the Huntress retrieved the Totems of Hircine from across Skyrim and brought them to the Underforge for worship, though the locations from where they were retrieved is unknown. [6]