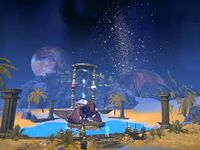 The Spilled Sand is an obscure realm speculated to be the realm of Alkosh that exists beyond even the Sands Behind the Stars.[1] It is not a physical place, but a story which is simultaneously part of the tapestry of time while also outside of it.[2] Masser and Secunda are visible from the realm, indicating that it resides in the Mundus. The realm consists of an endless looping expanse of sands; a giant golden dragon, either deep in slumber or possibly dead, can be seen partially buried in the sand. In the center of the realm lies a golden oasis with Alkosh's Hourglass,[3] the symbol of the Dragon God of Time.[4]

The Spilled Sand was accessed by the Vestige in the 2E 582 in pursuit of the Mask of Alkosh. The dragon Nahfahlaar described the realm as a myth made manifest that was simply a "trick of the mask".[5] The Khajiit hero Ja'darri described it as not a place, but rather a story being told again and again, though when pressed would not say outright if it was the realm of Alkosh.[2] Under the guidance of Ja'darri's spirit, the Vestige and Nahfahlaar performed a ritual through Alkosh that imbued the mask with the power to take on the dragon Laatvulon, and later Kaalgrontiid.[6]