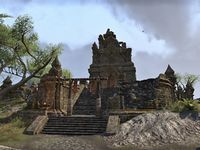 The province of Elsweyr

The Temples of Two Moons Dance are places of philosophical study and martial training located throughout Elsweyr.[1][2][3] They date back to the First Era at the latest, when the Khajiiti kingdom "Ne Quin-al" (now called Anequina) was known to trade the mighty graduates of its Temple to other Khajiiti kingdoms in return for various needs.[1] The Temples have been known to produce the most skilled warriors. For untold years, the Temple in Torval has been the finest training ground for unarmed combat in all of Tamriel. Masters of the Two-Moons Dance have designed a prescribed course of training over many years in accordance with the Riddle'Thar. Many begin their training as children. The training is mental as much as physical. One of the most important lessons in their curriculum is to reject one's vanity. Students at the highest level possess such a degree of power and skill that few can best them in weaponless combat, even with the aid of magic. At the completion of their studies, students partake in a festival consisting of competitions in both debate and combat, then either go out into the world or become teachers themselves.[2]

There are many Temples of Two-Moons Dance. The known ones include one located in the Anequina region of northern Elsweyr, one in Torval, one on the island of Khenarthi's Roost, one in Dune, and one in Rawl'kha. The temple in Rawl'kha is particularly important as it was where Rid-Thar-ri'Datta, the first Mane, revealed the Riddle'Thar Epiphany in 2E 311. It is considered the most culturally significant Temple of Two-Moons Dance in northern Elsweyr.[3]