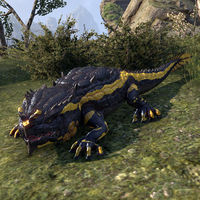 Salamanders are amphibians found in tropical regions such as Summerset, Murkmire and Southern Elsweyr.[1] They can vary in size from very small to extremly large.

Large salamanders are capable of being very dangerous, with them attacking prey using their long tongues and tails.[2] They also defend themselves with intense elemental magic.[2][3] Some salamanders have a knack for one particular brand of elemental magic. It's not too unusual to find a salamander that is talented primarily in producing natural shock, flame or frost magic instead of utilizing all three in equal measure.[4][5] The toxin skin salamander is a breed that relies on venom instead of magic.[6] Scholars studying arcane husbandry have learned of Ayleid rituals that grant luminescent qualities to common salamanders.[7]