"I'm doomed to be R'Aathim, living and dead. It's godhood of a sort, but what a sort! Don't begrudge me my long life span. Think of me doomed to eternity in the gloomy Ebonheart council chamber listening to the eternal wrangles ... small wonder the dead R'Aathim pulled the place down on the live ones twenty years ago, thus causing my brother and my mother to join their number. The dead R'Aathim must have welcomed the century and a half of respite while the Nords held Ebonheart." — Moraelyn, "King Edward, Part XII"

The Ra'athim Clan (also spelled R'Aathim)[1] is an ancient family of Dark Elves that hail from the city-state of Ebonheart, in the province of Morrowind. Originally, the Ra'athim Clan were a group of miners with the territory that stretches across the central mainland, but they eventually became the royalty of Ebonheart.[1] Their lineage went on to become the great leaders of both Morrowind and Tamriel. The Empress-Regent, Katariah is one of their most well-known members.[2] In early Morrowind history, the Ra'athim Clan held the High Kingship of Morrowind.[3]

The Staff of Chaos

The Ra'athim Clan were known as prominent figures throughout history. In early Morrowind History, the Ra'athim Clan retained the High Kingship of Morrowind and held lucrative mining fiefdoms across Morrowind, between Ebonheart and Mournhold.[3] According to Tribunal mythology, the Morag Tong had a sphere of influence in the Ra'athim's territory.[4] King Kronin Ra'athim was the King of Ebonheart when the First Empire of the Nords had invaded the province of Morrowind in 1E 240. The Nords had driven the Ra'athim Clan out of Ebonheart and into hiding. Several years later when the Dark Elves fought back, King Kronin and his three sons took to guerrilla warfare, driving out the Nords out of their domain. Moraelyn's aunt, Yoriss became the Queen of Kragenmoor after the war.[5] At one point, King Kronin had passed away, and left his son, Cruethys to the throne at Ebonheart, but he too passed away. Moraelyn, Cruethys' brother, became the King of Ebonheart afterward. The third brother, S'ephen was an illegitimate son of Kronin and was born in Mournhold.[3][6] He was not considered a Ra'athim. To honor him, Moraelyn had created a temple cult dedicated to Ephen. Moraelyn had left the Staff of Chaos in the protection of Ephen, in his tomb underneath Mournhold.[3] Eventually, King Moraelyn passed the mantle to his daughter, Lian, who in turn, had twin sons that were left, joint-heirs. At this point, the High Kingship had been left vacant due to a provincial emergency. Both twins were given separate kingdoms that resulted in the split that became modern-day Ebonheart and Mournhold.[3]

Throughout the years, the Ra'athim Clan continued to rule over Ebonheart. A group called the Nightingales were affiliated with the Ra'athim and Ebonheart.[3] Prior to this, the Ra'athim Clan were a part of the minor House, House Mora. House Mora would, in turn, become absorbed into the Great House Hlaalu. Despite the fact that Ebonheart is Morrowind's oldest city, Mournhold was given the Staff of Chaos due to Moraelyn's declaration and Ephen's origins. And so their jealousy had become greater when the Staff was placed in Mournhold, and Tiber Septim had taken the Horn of Summoning from them.[3] In the early-mid Third Era, the city-state of Ebonheart, and the Ra'athim Clan were allies of Potema Septim, the Wolf-Queen of Solitude. Ebonheart fought alongside her during the War of the Red Diamond, which ended with Potema's death in 3E 137. Because Mournhold was an ally of the Third Empire, Ebonheart was in a bad situation, and to preserve the peace between both factions, Emperor Magnus Septim had arranged the marriage of Katariah Ra'athim, Duchess of Vvardenfell with his son, King Pelagius Septim III of Solitude in 3E 141. Because of Pelagius III's crippling madness, Katariah had essentially taken control of the Empire, working alongside the Elder Council to not only govern the Empire but hide Pelagius III's madness. As time went on, Katariah had a child with Pelagius III named Cassynder Septim, and Pelagius III died on Betony.[2] Katariah I was named the Empress-Regent, and her reign (lasting for forty-six years) was known for being the Empire's celebrated years. However, some people claimed that Katariah's ascension was the decline of the Septim Dynasty. When Katariah died, Cassynder Septim was the Emperor of Tamriel, and his half-brother, Katariah's son, Uriel Septim IV was named the King of Wayrest and the rest is history.[7]

By the late Third Era, the most prominent member of the Ra'athim Clan was High King Athyn Llethan of Mournhold, and his niece, Barenziah.[UOL 1] The Ra'athim lineage was supposedly dying out at this point.[8] Barenziah had ruled Mournhold for several years, as far as the early Third Era. During Barenziah's late reign around 3E 376, the Staff of Chaos was stolen from Ephen's tomb. Barenziah had been seduced by the Nightingale, a bard commonly known to have been Jagar Tharn. Some sources claimed that this was false, and that the Nightingale was a former Indoril noble named Drayven Indoril. Drayven was one of the Nightingales, a group of extremely-talented thieves that serve Nocturnal. And so, as the story goes Tharn had hired Drayven to obtain the Staff of Chaos. Despite Drayven's ties to House Indoril, the thief may have been an unknown member of the Ra'athim Clan. According to the book, The Real Barenziah, v 4, the Nightingale was an heir of Moraelyn and the last of his line. With his exclamation, the Nightingale was able to acquire the Staff of Chaos and give it to Jagar Tharn by certain accounts, with others saying Jagar himself as the Nightingale acquired the legendary staff.[8] The Imperial Battlemage attempted to kill Drayven, but it ended in failure and so he retired to Shor's Stone in Skyrim. Barenziah had a child with the Nightingale, named Dralsi, but later abandoned her to keep the truth quiet.[9] Eventually, Dralsi took the mantle of Nightingale, same as her daughter, Karliah, who was alive during the Skyrim Civil War in 4E 201.[10] Barenziah was the Queen of Morrowind since the early Third Era, but when the Arnesian War occurred in 3E 396, she had become the Queen of Wayrest,[3] only to return to Morrowind around 3E 427. Her son, Hlaalu Helseth was the High King during the waning years of the Third Era.[11] Her daughter, Morgiah married King Reman Karoodil of Firsthold and currently has two children, Goranthir and Rinnala.[12] 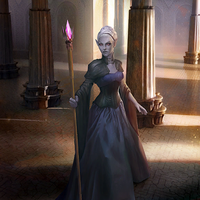 Kronin
King of Ebonheart during the Nordic Occupation in Morrowind.[5]
Yoriss
Queen of Kragenmoor after the Nordic Occupation.[5]
Cruethys
Son and Successor of King Kronin.[6]
Moraelyn
Legendary warrior known as the Witch-King of Ebonheart.[6]
Lian
Moraelyn's daughter and successor.[3]
Lian's twin sons
Moraelyn's twin grandsons that were given joint heirs as Ebonheart and Mournhold.[3]
Katariah
Duchess of Vvardenfell and Wife of Emperor Pelagius III.[2]
Athyn Llethan
High King of Morrowind and successor of Barenziah in the late Third Era.[UOL 1]
Barenziah
Former High Queen of Morrowind, and mother of Helseth Hlaalu and Morgiah.[UOL 1]
Morgiah
Daughter of Barenziah and Queen of Firsthold.
Rinnala and Goranthir
Morgiah's children.[12]
Hlaalu Helseth
High King of Morrowind and son of Barenziah.
The Nightingale
The Master Thief that stole the Staff of Chaos.[8]
King of Ebonheart
The King that helped Symmachus hide the Staff of Chaos in Mournhold.[8]
Karliah
A prominent member of the Skyrim Thieves Guild and of the Nightingales.