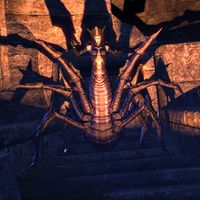 A Spider Daedra
"Some of this world claim the gods as ancestors. To them, the Daedra are divine beings who are not the ancestors of Tamriel's people. Your "Divines" exhausted much of their powers shaping your world. We did not."
—Naluroen[1]

Perthan,[2][3] more commonly known as Spider Daedra, are semi-intelligent Daedra[4] who appear as giant spiders with armored carapaces and humanoid torsos.[5] They are associated with Mephala,[4] though they can be seen serving other Princes,[4] such as Molag Bal.[6][7] Other Daedra such as Aureals may summon them to fight.[8] Spider Daedra are capable of speech,[9] and some are willing to engage in relatively peaceable conversation with mortals.[1]

They are so fierce, unruly and irrational that not even Mephala's worshipers can trust them, as they may not heed the Spinner's commands.[5] Due to their disobedient and willful reputation, many sorcerers in Morrowind are unwilling to summon them.[5] They are unstable, oversexed, overstimulated, excitable, high strung, and keeping them focused and on-topic in conversation is a difficult task.[10] Mortals view them as hateful, loathsome, and lacking compassion, though befriending and jovial in conversation, and when lost in their realms of Oblivion find no other option but to come to them for help, with their aid suspected to be part of a larger deception on behalf of their princes.[6] They are some of the more powerful Daedra, with formidable melee and spellcasting abilities. They can spin webs, spit poison and cast powerful storm spells.[11] They can summon spiderlings to aid them in battle.[11]

They weave cocoons to ensnare mortals,[12] which are so resilient that they can only be broken from the outside.[13] They are known to keep mortals as "ornaments" in their collections, ensorcelled into being thralls for their comfort and entertainment, as well as to provide sustenance to their spider "children".[1]