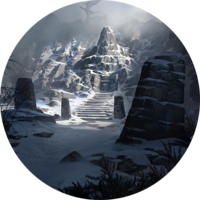 Mount Anthor is a mountain found southwest of the city of Winterhold, in the Winterhold region of Skyrim. The Winterhold Mountains stretch from Hsaarik Head in the northeast,[1]:454 traveling around the Winterhold Glaciers to Nightcaller Temple, and make up the border with the Pale to the south and east, meeting with Eastmarch's Lake Yorgrim and Giant's Run in the southeast. Due to the grandness of the peak, the mountains are often referred to as the Mount Anthor range, and include the Wayward Pass. Ancient Nords built a Word Wall at the summit of the mountain.

The mountain is most famous as the site of the battle between Olaf One-Eye and the dragon Numinex during the War of Succession.[2] The mountaintop once again became a dragon lair after the return of Alduin in 4E 201, displacing the band of warlocks who had previously occupied it. The jarl of Winterhold put out several bounties in an attempt to drive off the dragons.[3]

Sometime circa 4E 201, the Forgotten Hero and a Dunmer sorceress named Laaneth killed a dragon at Mount Anthor and retrieved its skull at the request of Alfe Fyr.[4]