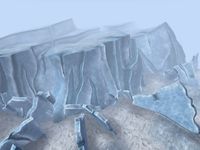 The Mortrag Glacier was a large glacier once located along the northwestern coast of the island of Solstheim in the Moesring Mountains. Castle Karstaag was located just east of it. The glacier was hollowed out and a Daedric Ruin was built within its interior, and it was used to host the Hunter's Game during the Bloodmoon Prophecy of 3E 427. The icy tunnels were filled with werewolves, the Hounds of Hircine. The Prince kidnapped four champions from the island and brought them to the glacier, to act as the Prey. The glacier was destroyed when an Aspect of Hircine was defeated by the Nerevarine, ending the Hunt and marking the first time that the Prey succeeded in killing the Hunter. The glacier subsequently collapsed, becoming a jagged ice field.[1]

By the Fourth Era, the remnants of Mortrag Glacier would become known as Mortrag Peak, one of the highest points on Solstheim.[2]