Baar Dau[1] (also known as the Ministry of Truth[2] or Lie Rock[3]) was a celestial rock or moonlet which hovered above Vivec City in southern Vvardenfell.[4] According to the prevailing legends, it was flung from the Void by either Sheogorath[1][5] or its own malevolence,[3] but was prevented from crashing into the city by the Tribunal god Vivec. Vivec allowed it to remain looming above the city so that if its people ever ceased to love him, the rock would fall and destroy them.[3] Other lesser-known tales and theories vary widely as to Baar Dau's origins, with one identifying it as a former Magna Ge named Una, another insisting that it was an egg from which would one day emerge the nightmarish offspring of Vivec and Molag Bal, and yet another claiming that it was Malacath's dung.[6] 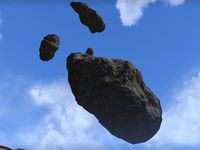 Baar Dau in 2E 582, after descending closer to the city

Baar Dau originally rested higher in the sky, but plunged dramatically in 2E 582, when Vivec's power was temporarily drained. The moonlet remained aloft only tenuously, showering Vivec City with burning fragments. After Vivec regained his power, he kept Baar Dau in its new position, just above the High Fane of the Temple Canton.[7] Some time later, Baar Dau was hollowed out by the Tribunal Temple and became the Ministry of Truth, where the Temple would imprison dissident priests and attempt to reform them.[2] The high-security prison was accessible only through levitation, and was directed by a Grand Inquisitor who per tradition, wore a ring fortified with great enchantments.[8] The main areas were the Hall of Processing and the Prison Keep. Temple pilgrims offered levitation potions at the Shrine of Daring, which was dedicated to Vivec stopping the moon from destroying the city.[2]

Early in the Fourth Era, after the disappearance of Vivec, the magic keeping Baar Dau afloat began to weaken. Two Dunmer, Sul and Vuhon, created an ingenium, a soul-powered device which supported the rock.[9] It was created by making a pact with Clavicus Vile, who had a penchant for souls. Hundreds of captured souls were needed to run the machine, but eventually living people were used. Only the people with the strongest souls were sacrificed. Ilzheven, Sul's love, was sacrificed by Vuhon, and the ingenium was destroyed when Sul attempted to rescue her. In 4E 5, without anything holding it up, Baar Dau resumed its long-delayed fall, returning to the momentum it had before being halted. This obliterated the city of Vivec, leaving a crater which would become Scathing Bay. In turn, the impact created tsunamis which ravaged mainland Morrowind and caused Red Mountain to erupt, devastating Vvardenfell.[9] The disaster of the Red Year effectively ended the ascendancy of the Tribunal Temple and the mainstream worship of the Tribunal as gods.[10]