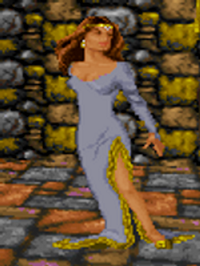 Within her chamber atop the Direnni Tower

Medora Direnni, the Lady of Balfiera (also called the Witch of Daggerfall, and—perhaps pejoratively—the Queen of Oblivion) was a Breton noblewoman[nb 1] from the Isle of Balfiera, the court sorceress of Daggerfall's King Lysandus, and his mistress.[1] The sorceress was of Direnni Clan lineage, and resided in the Direnni's ancestral home, the ancient and massive Direnni Tower of Balfiera.[1][2]

During the War of Betony, Lysandus' wife, Queen Mynisera, banished Medora from the Daggerfall court. The sorceress retreated to Balfiera, but when Mynisera placed a curse upon Direnni Tower and trapped Medora within, Lysandus decided to fake his death and live with Medora. Unfortunately, the king was assassinated during the war. When the king's ghost began haunting the streets of Daggerfall, Medora tried to contact Lysandus' spirit, but only ended up raising the dead all over the island. Some time later, an agent of the Blades, sent to investigate Lysandus' ghost, later helped Medora lift the curse upon Direnni Tower. In return, Medora assisted in the agent's efforts to put Lysandus' spirit to rest.[1][3][4]

During the reign of King Lysandus, Medora Direnni served as the court sorceress of the Kingdom of Daggerfall, and for some time was secretly the king's mistress—an affair which blossomed into love.[1][5] In 3E 402, the independent island of Betony agreed to vassal itself to Daggerfall, ostensibly for protection against the rising threat of piracy on the Iliac Bay.This move angered King Camaron of Sentinel, who cited an old agreement which named Betony as a traditional holding of his kingdom, and the situation escalated.[6]

Most of Lysandus' advisors urged the king towards war, save for Medora and the queen mother (and renowned mystic), Nulfaga. The sorceresses foresaw doom for Daggerfall should that happen, but their warnings went unheeded. Sentinel declared war, and Lysandus led his armies to battle in what would become known as the War of Betony.[3][6][7]

While Lysandus was away fighting the war, Queen Mynisera learned of her husband's affair with Medora, and had the sorceress banished from court. Medora returned to the Direnni Tower, her Clan's ancestral castle on the Isle of Balfiera. But the jealous Mynisera was not finished with Medora and placed a curse upon her, trapping her within her tower.[3]

Shortly before the end of the war in 3E 403, Lysandus decided he would rather spend his life with his beloved Medora. He planned to secure victory in the war at Cryngaine Field, then fake his death[8] with the help of Lord Woodborne, a noble of Wayrest. However, Woodborne assassinated Lysandus on the eve of the final battle.[1][3]

A few months after his death, Lysandus returned as a ghost and began haunting the City of Daggerfall, screaming only one word: "vengeance".[1] Medora attempted to conjure his shade, but to no avail. The Lady of Balfiera tried greater and greater conjurations, but succeeded only in reanimating the dead all over her island, giving Balfiera a reputation as being haunted. Ironically, Balfiera was a haven for pirates—the same pirates that had been harassing Betony. They were driven out of the Iliac Bay by the undead hordes menacing the island.[3]

"Lady Med[ora]
...favor. They intend to slay him. I am sending ....[arch]ers to stop them. You must support me. If the empire finds I have attacked royal advisers of Wayr[est, e]ven if they are assassins, my people will never win the same status and respect as the Khaji[it].........[Argon]ians. However, with your support I c............. a hero of the empire, and win respect for my people."
—Gortwog

In 3E 405, Emperor Uriel Septim VII sent an agent of the Blades to investigate the haunting in Daggerfall. The trail led to Medora, though the curse forced the agent to brave the undead-infested Direnni Tower to find her. Medora wasted no time in imploring the agent to help free her from her magical imprisonment. The sorceress required Nulfaga's assistance; though Lysandus' mother had reportedly gone mad with grief upon Lysandus' death, Medora hoped she'd recovered enough to provide a necessary ingredient to dispel the curse—a great unicorn horn. Nulfaga had withdrawn to Shedungent, her castle in the Wrothgarian Mountains, and while the Dowager Queen was still lost in her grief, the agent managed to find the unicorn horn within the castle.[9]

Once freed, Medora discovered a magical dust that could soothe Lysandus' rage. However, it was in the hands of Gortwog gro-Nagorm, the Orc Warlord of Orsinium. Gortwog had attempted to prevent Lysandus' assassination, and out of respect the Orc king consented to Medora's request; his only condition was that she support his claim to the "heart of Tiber Septim". The Dust of Restful Death was already on Balfiera and was retrieved by the agent, though it was wrapped in an undelivered letter from Gortwog to Medora that implicated Wayrest in Lysandus' murder. The sorceress set about preparing the Dust, while the agent pursued the matter further.[10]

After a few weeks the powder was ready, though it would only soothe Lysandus' pain enough for him to choose his own exorcism. Medora once again contacted the agent, who found Lysandus' true tomb in Menevia and performed the ritual. Lysandus' spirit was able to communicate, and (naturally) demanded vengeance against his murderer, Lord Woodborne. Lysandus got his wish, Lord Woodborne was exposed and taken down. It is rumored the agent either killed Lord Woodborne, or brought evidence to someone who could destroy him. Some say it was Medora who exacted vengeance, and that a flock of Daedra descended upon Woodborne Hall and carried the treasonous nobleman off to his doom.[11][12]