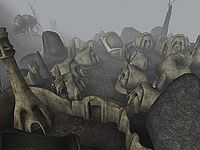 Markgran Forest during the Imperial Simulacrum

Maar Gan (also called the Markgran Forest)[1] was a walled-village that was occupied by the Great House Redoran, found in the Ashlands of Vvardenfell. The Tribunal Temple in Maar Gan was an important pilgrimage spot for those in Ald'ruhn. In Tribunal mythology, it was here where Vivec had taunted Mehrunes Dagon to throw a rock at him, instead of his people. Now pilgrims come here to re-enact the event through the Dremora, Anhaedra.[2]

Maar Gan's founding is unknown and clouded in speculation. Though it did not exist in 2E 582 of the Interregnum,[3] an area known as Maar Gan was a stop for Silt Strider caravaneers during this time.[4]

Before the construction of Maar Gan, and the village's temple, Vivec had taunted Mehrunes Dagon so that he would throw a rock at him, rather than his people. Ever since then, the very sight would become a pilgrim spot and the site of the Tribunal Temple in Maar Gan. The rock that Mehrunes Dagon had hurled would become known as the Magic Rock of Maar Gan, and would forever be guarded by a Dremora named Anhaedra. Pilgrims would have to re-create the situation.[2]

During the Imperial Simulacrum in the late Third Era, the village of Markgran Forest was an active settlement, being ruled by Lord Nisain. It had a rivalry with Verarchen Hall.[1] It was neighbored by several settlements, one of them being Stoneforest in the south.[5]

The village of Maar Gan was active in 3E 427, during the outbreak of the Blight, and the sudden appearance of the Sixth House, House Dagoth. The village would be under the jurisdiction of Lady Brara Morvayn, who governed the village from Ald'ruhn, in her manor.[6] The Sixth House had a presence in Maar Gan.[7]

In 4E 5, known as the Red Year, Red Mountain would erupt for the first time in many years, since the early-mid First Era. Not only did Baar Dau fall onto the Temple city, Vivec, but the entire district of Vvardenfell would be flooded in endless lava. Many settlements were destroyed in the process, among them was most likely Maar Gan.[8]