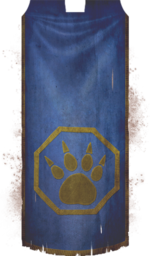 The Lion Guard was a Breton knightly order that served as the elite and personal guardians of the Daggerfall Covenant's rulers. The order's tenets, simple and unwavering, were to fight for the good of all High Rock and every Breton.[1]

Members of the Lion Guard could only rise through the ranks by proving their bravery and loyalty. Valor in battle, loyalty to High Rock, and courage and strength of character in the face of adversity were to be shown by aspiring recruits. Nobility and wealth were not qualifiers for promotion. These standards were in place to preserve the order's reputation as steadfast protectors of the highest martial skill. Their standards were strict, and knights who violated these standards were promptly removed from the order's ranks.[2]