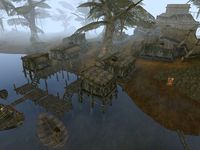 Gnaar Mok was a financially deprived fishing village located on an island in the Bitter Coast region of Vvardenfell.[1] The local Hlaalu manor dominated the village; the Thieves Guild also operated out of a dilapidated hut in town. The road to Gnaar Mok from Ald'ruhn was a long and exceptionally unpleasant walk, made perilous by the lack of trails or marked routes and casual travelers being ill-equipped for the attacks of wild beasts and brigands, making it preferable for them to instead keep to the roads and travel services.[2]

During the Second Era, Gnaar Mok was not a settlement but rather the site of a Arenim Manor, consisting of a mansion and a warehouse; however, an area known as Gnaar Mok was a stop for Silt Strider caravaneers during this time.[3] In 2E 582, Councilor Dolvara of House Redoran resided in the manor, and was later assassinated in it by the Morag Tong.[4]

In 3E 410, Sixth House bases were founded near Gnaar Mok, with its operatives exploiting smuggler organizations and communications to spread their influence among victims unbalanced by Dagoth Ur's dream sendings.[5] By 3E 427, a number of huts had been built around the manor, turning it into the settlement of Gnaar Mok. That year the Boots of Blinding Speed were seen in the possession of a Redguard by the name of Peminie, who asked the Nerevarine for safe passage to Gnaar Mok. The Nerevarine complied, and received the boots upon leading her there. The Nerevarine was then informed by locals that Peminie was in fact a wanted felon; upon interrogation, she became hostile and had to be killed.[6]