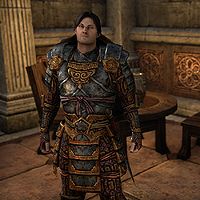 The Gautier family is a noble clan from the Kingdom of Camlorn, in the province of High Rock. For an unspecificed time, the Ebon Crypt in the hills of King's Guard served as the family's mausoleum until it was taken over by the necromancer, Thrandyke the Repugnant, who used it as place to do experiments,[1] leading to the create of a powerful monster known as the Ebon Lord.[2]

When the Daggerfall Covenant was active in the mid-Interregnum, the Gautier family served the alliance but also played a significant part in the conflict that transpired in Glenumbra against the Bloodthorn Cult, specifically in the siege and later retaking of Camlorn. General Gautier was a high-ranking member of the Lion Guard, the knightly order of the High King, in this case, Emeric of Cumberland. He led the charge that reclaimed Camlorn from the werewolves and Faolchu.[3] His son, Darien Gautier was the captain of the city guard during the city's siege and was able to rescue many citizens.[4] He later joined the Lion Guard and helped in their latter battles such as the raid over Cath Bedraud,[5] the liberation of Northpoint,[6] and later the invasion of Coldharbour with the Fighters Guild.[7]