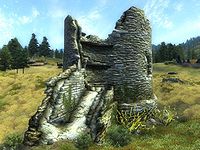 Sutch was a settlement located in the Gold Coast region of Cyrodiil.[1] County Sutch extended north towards the Brena River, an area which is now considered part of County Kvatch. Sutch was connected to the Gold Road north of Anvil.[UOL 1][2] 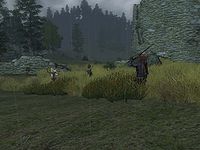 Thief of Virtue tells the tale of Ravius Terinus, a master thief of the Thieves Guild, who attempted to rob the coin collection of Baron Ignace from his castle in Sutch. Ravius failed to steal the coins, but instead slept with Baroness Veronique in order to hide from the guards. The book states that Sutch was a city in Hammerfell, although it is possibly an unreliable source, as the author also believes the Thieves Guild to have been wiped out four hundred and fifty years prior to the book's writing.[3] However, it is not out of the realm of possibility that Sutch was once considered part of nearby Hammerfell, and the book's vague publication date could mean that the guild in mention was indeed wiped out, as the founder of the modern Thieves Guild states that "there have always been thieves' guilds."[4]

Jorunn the Skald-King visited Sutch in his youth, sometime between 2E 546 and 2E 572.[5] Phrastus of Elinhir visited the marketplace of the city at some point,[6] and two towers near Sutch could be seen behind Varen's Wall around 2E 582.[7]

The city was still marked on maps around 2E 864.[1] By 3E 433, nothing remained of the settlement but the ruins of Fort Sutch Abbey. The fort was home to a band of mercenaries until their leader, Roderick, was poisoned by the Dark Brotherhood, although it was made to appear that he had died of a disease.[8] The fort was attacked by Daedra during the Oblivion Crisis when an Oblivion Gate to the Deadlands opened outside its walls. This portal was destroyed by the Imperial Legion, with the help of the Hero of Kvatch.[9]