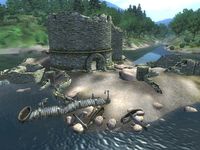 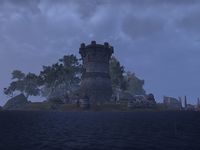 Fort Grief is a ruined Imperial Legion fort located on Fort Grief Island,[1] an island at the mouth of the Silverfish River in Niben Bay.

The fort was in existence as early as 2E 582.[2] It was abandoned by the Legion during the relatively peaceful Third Era.[3]

By the late Third Era, the ruins had come to be used by an Orc usurer named Kurdan gro-Dragol as the location for the "Hunter's Run", a bloodsport event where people would pay a great deal of money to hunt and kill live human prey.[4] Kurdan would promise to clear debts in exchange for the recovery of a fictional family heirloom, the Axe of Dragol; he would arrange for transport to the island, and the victim would then become trapped within the ruins via a complex locking mechanism. The only way for the prey to "win" was by descending into the underground depths of the ruins and killing all the hunters. However, the game was monitored by Kurdan, who would ensure that no one left the island alive even if they managed to defeat the hunters.[1]

In 3E 433, the Champion of Cyrodiil was lured into the Hunter's Run in search of a missing Breton man named Aleron Loche. The Champion successfully defeated Kurdan and his clients and escaped from the island, but Aleron was killed in the process.[5]