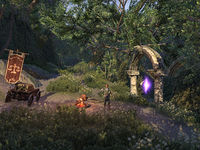 Ebon Stadmont is a forest located on the base of Eton Nir, in the province of the Summerset Isles. Ebon Stadmont is a location shrouded in mystery, the source of various legends and myths found throughout the Summerset Isle. Ebon Stadmont's tablets and ruins are covered in an unknown and mysterious language, one that is said to be similar to that of the Daedra, with lines of text on structures with statues of crows—a creature associated with Nocturnal.[1]

Ebon Stadmont's origins are largely unknown; the text on the various tablets in its ruined halls have long left the people of the Summerset Isles wondering.[2] Sometime in the mid-Second Era, the future Grand Maestro, Forte of the House of Reveries, traveled to Ebon Stadmont with a troupe on an expedition. There, Forte and his entourage studied the language, from which he was able to translate several stanzas of poems.[1] But not everyone made it out—one of his associates, Fletch was compelled to go deeper into Ebon Stadmont by a malevolent spirit that inhabits the ruins.[3]

Sometime around 2E 582, Andewen—a member of the Mages Guild—traveled to the forest, to uncover its mysteries. Andewen and an adventurer delved deep into Ebon Stadmont; through a series of events, Andewen encountered the so-called Spirit of Ebon Stadmont, who trapped her in the Ebon Sanctum until her waning years, having her study the language. The adventurer who accompanied her, however, used the power of the language to travel in time, giving Andewen's future research to her past-self—before entering the forest—which she published to the Mages Guild, to mostly doubtful reception. Regardless, Ebon Stadmont remained in infamy.[3][4]

Around the same time, the Psijic Order made inquiries into the language of the ruins, believing it to be connected to how Ritemaster Iachesis had hidden the Heart of Transparent Law—the Stone of the Crystal Tower—long ago. In the ruins they encountered the Earl of Nocturnal in the Court of Bedlam, who revealed that the language could only be used by mortals and that Nocturnal had given Iachesis knowledge of it, allowing him to use an incantation to hide the Heart of Transparent Law. For this reason Nocturnal had been researching the language herself as the "Spirit of the Sanctum"—using mortal agents like Fletch and Andewen—hoping to find a way to claim the Heart for herself.[5]

During the Imperial Simulacrum in the late Third Era, the forest had lent its name to the settlement of Ebon Stadmont, which was under the reign of Lord Lillandllon. It had a rivalry with the village of Marbruk Brook.[6] It was neighbored by several settlements, including Marbruk Brook in the northwest, Old Falls in the east, and Riverfield in the southeast.[7]