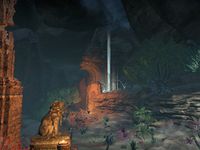 A Skyshard in the Desert Wind Caverns

The Desert Wind Adeptorium dates back as far as the early First Era, when the Golden Beast of Anequina, Darloc Brae began to insert his dominance over the north, which started in 1E 461. The monastery was built to protect the Khajiit fleeing his wrath, at least that is what is told in tradition. Its original name is lost to time,[2] but it has since hosted the Order of the Desert Wind, one of the many orders that are found across the provinces. While the adeptorium expanded with initiates and adepts throughout the years underneath were spacious subterranean caves with ancient pillars blend together with the growing environment.

Sometime in the Interregnum, the Grand Adept of the Desert Winds was Sehana. In 2E 582, Usurper Queen Euraxia Tharn order her warriors to ransack the Desert Wind Adeptorium, to claim secrets need in her conquest for ultimate supremacy across Northern Elsweyr. The Euraxians infiltrated the sanctuary via the Desert Wind Caverns, using their necromancy to control ghostly spirits. Lieutenant Lepida orchestrated the attack onto the adeptorium and was successfully able to acquire knowledge from the Grand Adept. With the information, she killed the Grand Adept, only to be defeated by the adept, Zamarak and his ally. In retaliation, the Order of the Desert Wind joined the Northern Elsweyr Defense Force in their growing battle against Queen Euraxia Tharn and the returning Dragons.[3] All the while, the Baandari Pedlars tended to send warriors to recover lost scrolls in the Desert Wind Caverns.[4]