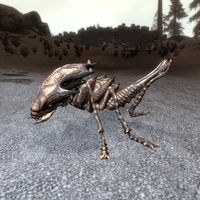 Ash Hoppers are moderate sized insect creatures found in Vvardenfell, southern Solstheim and High Isle. The Amber Ash Hopper species is native to the upper Ashlands and the slopes of Red Mountain and can be taken in as low maintenance pets.[1] The Deep-Moss Ash Hopper species is native to the fungal-forested uplands and the coastal marshes of southern Vvardenfell. They are the mascot bugs of the Buoyant Armigers due to their admiration of their green carapaces.[2]

The Ash Hoppers of Solstheim differ in size and have a head shape which is somewhat like Scrib. They are hostile to travelers unlike their more docile Vvardenfell counterparts and they can carry droops.[3] Their meat and jelly is used in cooking and alchemy,[4][5][6] and their chitin can be used in creating traditional Dunmer armor types. Their shells can also be made into lava-resistant overshoes.[7]