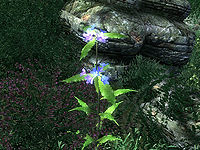 A tall, flowering plant that is most common in the West Weald region of Cyrodiil. The flowers are usually found in groups of two to five and normally grow near rocks. 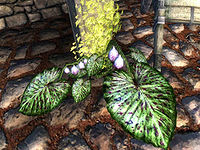 Alocasia is a short, fruit-bearing plant that can be found in the Elden Grove of Valenwood, but interestingly can be found across Mania, the northern region of the Shivering Isles. During the summer, the local Bosmer would cover the Alocasian leaves in silk so that the fruit can grow larger and become sweeter. It essentially slows down its growth. It is believed that Y'ffre takes the fallen fruit as tribute. It is very similar to the Water Hyacinth, however, this flower does not bear fruit.[1] 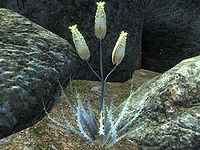 The Aloe Vera are tall and leafy plants that are found mainly in southern Hammerfell, but also in warmer climates like the Gold Coast in Cyrodiil, in pockets throughout the coastline and its hills. The Yokudans were well aware of the herb's potential in medicine, often using it to staunch the flow of blood and to heal wounds. It can be mixed with other ingredients to create elixirs, like combining the aloe's lacquer with a crushed leaf can lessen the effects of pox.[2] According to local legend, making a concoction with Ginkgo can boost one's stamina.[3]

There is a variety of aloe that exists across Tamriel, among which include the Salloweed Aloe in the vicinity of Phaer on the island, Auridon. The alchemist, Hendil learned that it could be used as a powerful sedative against his vampiric son.[4] The aloe vera of Vakka-Bok have been harvested by the Root-Whisper Tribe, deep in the wilds of Murkmire. It was known for its unnaturally fast healing properties, such as keep wounds from festering and soothes burns. While many people do not know why it heals so well, it is theorized that the arcane magic of the sun had given the plant its abilities.[5] 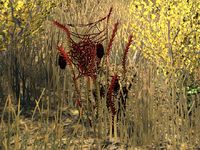 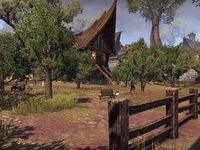 Apple trees are a common tree cultivated for its fruit, the apple. 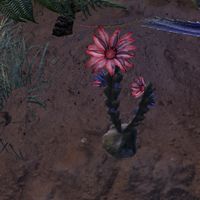 Arkay's Lash is a flowering cactus found in Northern Elsweyr. Its flowers are known for their medicinal properties. 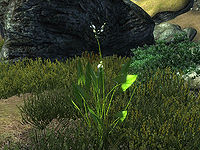 Arrowroot is a medium-sized, thick, rubbery tuber with tall leaves and small white flowers that comes from Valenwood. The plant is considered rare because it is scrawny and is rather unnoticeable. The most important part of the plant is the root because of its magical properties. Grinding it into paste can enhance the consumer's accuracy with projectile weaponry.[3] Though it is commonly found in Valenwood, there is a relatively large concentration across the Gold Coast, between Anvil and Kvatch. Every so often, they can also be found around the southern Niben Bay, the Larsius River, and even the Leyawiin outskirts.

A common tree that grows all around Tamriel, known for its denseness and flexibility.[6]. It is generally found in regions such as Craglorn in Hammerfell, where it is often twisted and angled, but also heavy.[7] It is also found in abundance in the eastern Gold Coast, which is riddled with highlands and dotted with dense forests of ash and other trees. These are harvested by the logging industry of Colovia, which supplies the great demand for construction and weaponry.[8]

The wood is sanded and used to craft bows, staves, and shields. It is generally stronger than birch, but weaker than mahogany, and is on par with ironweed, ironhide and galatite. Various factions from across the provinces use either ash or yew when they make their bows, among these include the Thieves Guild,[9] and the Order of the Hour.[10] Other groups such as the Welkynar uses it for the haft of their staves, and some factions like House Hlaalu import these materials, since the funguswood in their homeland is far more inferior than the ash or yew wood.[11] 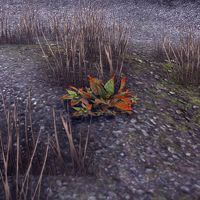 A small, low growing plant with strong-smelling leaves which are colored green from the base which fades to red at their extremities. The Ash Basil can found growing the Stonefalls region and the leaves are known for their pungent scent and insect-repelling qualities.[12] The local Dreugh also see the plant as a food source, those that feed upon it are said to secrete a superior, more durable Dreugh Wax.[13] 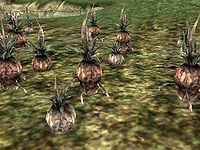 Ash yams are a grey, bulbous root vegetable with a few small leaves. Commonly found in the Ascadian Isles region of Vvardenfell. Following the Red Year of 4E 5, ash yams are also farmed in and around the Dunmer settlements on Solstheim. 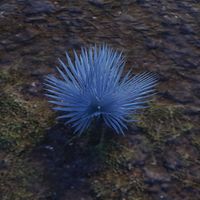 Ashen Fern is a rare native plant from the region of Vvardenfell, in the province of Morrowind. It is commonly found along the coast, including the Bitter Coast. It is used by the Ahemmusa Tribe, to mask their scent while hunting, and as a tribute to the cairn of Nalor Ahemmusa, their first Ashkhan.[14]

Ashland trees are native to Vvardenfell, but can be purchased from housing furnishers to be planted in homes across Tamriel. 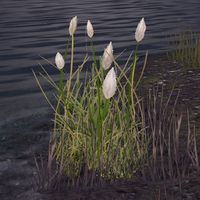 A plant that thrives in wet, marshy volcanic soil by the ocean. Ashreeds have stiff, inflexible reeds that are typically woven together to protect one's head. 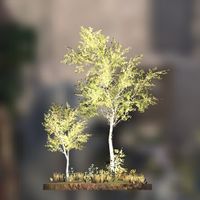 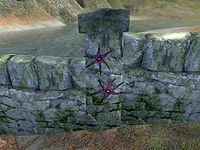 Aster Bloom is a purple, starfish-shaped fungus found in the Mania side of the Shivering Isles.

Aurialis is an endangered and possibly extinct plant found only on Summerset Isle.[15] It can be used to make a brilliant orange pigment which artists use to paint.[16] In 2E 582, an artists' rivalry almost drove the plant to extinction.[15] Aurialis is difficult to cultivate.[17]