The Imperial Arena circa 4E 175

The sewers that run beneath the district are known for being gory, such as the section of the sewers known as Beneath the Bloodworks which have previously served as a vampire lair.[2] The Harena Hypogeum section was held by the Ebonheart Pact during the Three Banners War.[3] 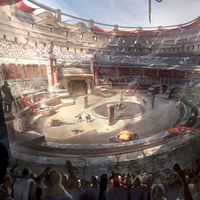 In 2E 582, Molag Bal's forces had taken over the Imperial City and used the Arena for entertainment by forcing captured Imperial citizens to fight against Daedric creatures such as Clannfear and Ogrim. The Vestige participated in the Arena against such creatures and against the Xivkyn, Dredaza the Ringmaster, who acted as the Arena's announcer. When Dredaza was defeated, a Reachman known as 'The Rat', who was a former advisor to Emperor Leovic, gave the Vestige information regarding the Dragonfires and how Molag Bal intended to snuff them out forever.[6]

During this period, members of all three alliances helped an Imperial Legionnaire, named Valga Atrius, in rescuing Imperial citizens from the Arena District that were enslaved by the Daedra there.[7]