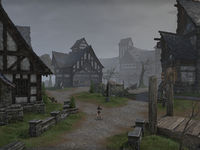 Aldcroft is a port town in western High Rock, located on the eastern shores of Glenumbra, in the region of Cambray Hills.[1] The town is surrounded by swamps and often shrouded in mist. Thanks to its location, it has become a key port that services the city of Camlorn from trade routes along the Iliac Bay. It is also known for its spicy stews.[2]

In 2E 582, after Faolchu the Reborn and his werewolf army attacked nearby Camlorn, the city quickly became filled with refugees, including Duke Sebastien, Camlorn's ruler. Some of Faolchu's werewolves hid among the refugees, but they were revealed and killed by the Vestige with the help of Gloria Fausta, a descendant of Faolchu. Unfortunately, Duke Sebastien was infected with lycanthropy as well. It is unknown if he was eventually killed or cured.[1]

Shortly before the Warp in the West, Aldcroft was a part of the county of Urvaius. Around that time, it contained a Thieves Guild guildhall and a temple of Julianos.[3]