"(Player's guild title), (temple) needs you for a dangerous mission to retrieve one of the lost (relic) of (temple's god). You will have to defy the power of (lich's name), its creator who then betrayed the temple and sank into evil. He is now a lich, and still guards the (relic). Are you willing?"

"I admire your courage, but tremble to think of the danger you are about to face. (Lich's name) guards his (relic) of (temple's god) in (dungeon). Remember, there is no need to slay the lich, just retrieve the (relic) and return it to (temple) here. If we have no word from you in (time limit) days, we will chant the Song of the Departed for you. (Temple's god)'s blessings upon you, (player's name)."

"I understand. A lich is a fearsome opponent for one of your youth and inexperience. Perhaps as you mature you will take up this again. (Temple's god) go with you." 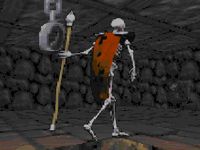 Get the drop on the undead spellcaster

Head to the dungeon named by the quest giver, enter it, and find the relic within. When you pick up the relic, a confirmation appears:

This is surely (temple)'s long-lost (relic).

The relic will be found near its maker, the lich. If you wish to fight the creature, it may be easier to take care of him before attempting to recover the lost item, especially if he is in a small room. When you hit the lich after picking up the relic, he hisses in fury:

"You dogs of (temple) will never have my (relic)! I made it and I will keep it. Nothing will stop me, not even the grave."

After you destroy the lich and recover the relic, return to the Temple to collect your reward.

When you hand the relic over, the quest giver says:

"Praise to great (temple's god)! I had not allowed myself to hope that you would actually succeed. (Temple's god)'s favor will surely shine upon you for this deed. As a small token of the Temple's gratitude, please accept this enchanted (magical item).

If you destroyed the lich, the quest giver adds:

"What? You not only retrieved the sacred (relic), but also killed the evil (lich's name)? You are truly one of (temple's god)'s favored ones. You will surely rise far in our order."

If you retrieve the relic but the time limit expires before you can return to the quest giver, you see the following:

A sinister voice whispers from nowhere, "The (relic) does not belong to you or the sentimental fools of (temple). I therefore reclaim what is rightfully mine." The (relic) vanishes.

In case you also destroyed the lich, you will gain additional reputation as shown below: