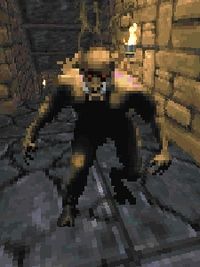 The lycanthrope may also be a wereboar... 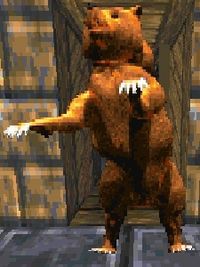 ...or just a regular grizzly bear

"We've got a little job you might be interested in. Seems there's a loup -- whatcha call your basic werewolf, wereboar, or some kind 'o werebeasty that's been bothering a lot of farmers in the area, and we need someone to kill it. It'll mean (random gold) gold in your pocket. That sound interesting to you?"

"Great. You'll find the loup over in (dungeon). We need the poor brute dead in (time limit) days, so you better be on your way, kid."

"Fine. Guess someone else'll have to do it."

This quest is one of the many dungeon crawls in the game. Head to the dungeon the Fighter Quester mentioned to you and find your target within. It can be a wereboar, a werewolf, or just an ordinary grizzly bear; each creature has a 1 in 3 chance of appearing as the quest target. There may be many creatures of the same type among the random dungeon monsters, but the quest requires you to slay a specific one. When you kill the correct lycanthrope, you receive a message:

The lycanthrope threat is ended.

However, if the quest target is a grizzly bear, the following message pops up:

This must be the "werebeast" everyone is afraid of. Just an ordinary grizzly bear.

After killing the target, return to the Fighter Quester and he will say:

If you also get the dungeon map he will add:

"Here's a map to a place called (random dungeon). All the killing and treasure you can handle. Knock yourself out."