"If you are, by chance, looking for work, an easy (gold) gold pieces, I just might have a job for you. It'll involve some combat, but you look like you wouldn't mind that. Does it sound like a possibility?"

"Very good. You know that Akatosh is the God of Time, but He is also a Dragon God, and we hold dragons as our holy symbol. One of our members of our fighting order, the Order of the Hour, has apparently gone berserk and taken to attacking our dragons right in the sacred grove. Of course, the murderer must be stopped. You will find the dragonslayer in a place called (dungeon). If you are not successful within (time limit) days, we will send the Order of the Hour in and your reward will be forfeited. May Akatosh bless you in your quest."

"I see. Well, that is disappointing." 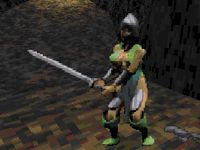 The dragonslayer may also be an Archer

Head to the dungeon named by the quest giver and enter it. Find and kill the dragonslayer, who will appear as an archer or a knight. There may be multiple instances of these enemies in the dungeon, but you must kill the specified target to successfully complete the quest. When the correct target has been slain, you hear the dragonslayer's final words:

Return to the quest giver for your reward.

Upon your return, the quest giver says:

"I am glad to see you back, (player's first name). And your mission was a success. As promised, here are your (random gold) gold. Thank you for your service."