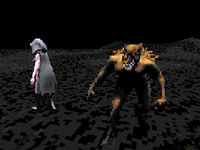 You will be hunted at night by vampires and werewolves... 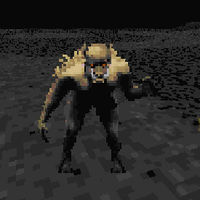 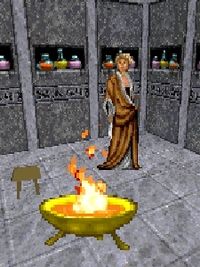 The mage is waiting for the concoction

The Cure for What AilsEdit

Speak to the beldam, who says:

"(Witch coven) have been contacted by the Mages Guild and asked about a special potion, a very sacred formula much desired in (region). They would be willing to pay (random gold) gold pieces for it, which would be yours. All we want is the regard of the Mages Guild. The journey will not be an easy one. Are you interested?"

The beldam goes on:

"Very good, (player's first name). Here is the potion. Now, you should be safe during the day, for those who want it strictly travel by night. They are expecting the potion at the Mages Guild of (town) in (time limit) days or less, so tarry not. Ask for a mage by the name of (mage's name)."

This is a very special potion indeed; although it only appears as "Pure water" in your inventory, the potion is a universal remedy which cures both lycanthropy and vampirism. You can use the mixture to cure your own afflictions, and the potion does not get used up if you do so. However, even the small amount you sample has an effect as you receive the message: You feel strange.

Until you deliver the potion, every being that wants it will be after you. You will be safe during daytime, but as soon as night falls you will be hunted mercilessly by lycanthropes and vampires unless you are in fast-travel mode. They will chase you the whole night until dawn, from 17:21 to 06:39. This means you can neither rest nor enter fast-travel mode as long as they are after you; you can only fight them or run. Since they come in great numbers, fighting is a rather tiresome affair. There can be a maximum of seven vampires, ten wereboars and twelve werewolves altogether. However, if you start the quest during daytime, and travel cautiously to your destination, you can avoid your pursuers completely as you will also arrive during the daytime.

When the very first night falls three messages pop up, one from each of the three following groups, at random: Vampires:

A voice gritty with the dirt of the grave hisses, "You! That potion belongs to us!"
"Give me the potion," somebody snarls. "It doesn't belong to you!"
You hear someone howl an unnatural, savage cry of desire. "The potion! The potion!"

The howl of a wolf sounds out.
You hear something snarl a piteous cry of yearning.
The cry of a wolf pierces the night. It is not a howl of hunger, but of yearning.

Head for the specified town, and locate and enter the Mages Guild. Find the mage who ordered the mixture to complete your quest.

Speak to your contact to hand the potion over. If you did nothing with the mixture, the mage says:

"Ah, a most rare and wondrous formula. Here are your (random gold) gold pieces. A bargain price for this potion."

However, if you sampled the potion (whether or not you were afflicted with either lycanthropy or vampirism) the mage will immediately detect something is wrong:

"What's this? The formula has been desecrated! I am disappointed that you cannot do this one simple thing for me."

You will not get a reward in this case, and will fail the quest.

A failed quest (time limit expired) results in a reputation loss according to the table below.