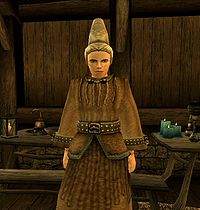 Uncle Sweetshare is an insane Nord alchemist, likely driven mad by moon sugar, who likes to give "candy to all the boys and girls" at Fort Frostmoth. Unfortunately, this has caused several deaths and other ill consequences, and you will be expected to put a stop to it.

Outside Uncle Sweetshare's house, a dead Khajiit can be found. Asking him about this will confirm that he poisoned his "apprentice".

He wears a white Colovian fur helm and a common robe. He carries a wooden staff, five samples of moon sugar, a copy of the Alchemy skill book The Song of Uncle Sweetshare, and a grandmaster's mortar and pestle. Aside from his natural resistance to shock, immunity to frost, ability to shield himself, and a natural frost damage spell, he knows the following spells: Dire Weary, Strong Fire Shield, Strong Frost Shield, Second Barrier, Strong Shock Shield, Strong Reflect, Strong Spelldrinker, Wild Spelldrinker, Absorb Speed [Ranged], and Absorb Strength [Ranged].